Author's note - I was ill, I lost my confidence and then I lost my mojo. This is the first piece of writing I have done in a while and I feel a touch rusty. On top of that I have tried something new (as is my want on my blog)...I have tried to write a 'straight' story. I hope you like it. I would like to thank Deepthought69 for psychologically holding my hand throughout my wobble. 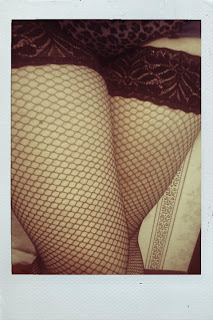 "For goodness sake, I am sick of this. It really does not matter how often I tell you how wonderful you are, how beautiful you are, how much I love your body including your thighs. You’ll never believe it until you work it out for yourself...gah!"

Joe slammed the bedroom door and stomped down the stairs leaving Zoe looking at herself in the mirror. It had been a throw away comment about her thighs being too fat and dimply. It was just a remark, one that slipped out of her mouth without hooking itself onto any brain cells prior to its exit. Now it was free and the damage had been done. She felt terrible; about herself, about pushing Joe yet again, about how the demons from her past kept returning to her, wraith like and frightening.

Zoe looked down at her thighs; they were serviceable, useful but not what she would call her best asset. She always felt that they were on the podgy side. Too much cellulite, too much fat, too much wobble. Her family used to tease her when she was an awkward teenager, calling her names like 'thunder thighs'. It made her cringe and feel that slow burning heat of shame at her own body. It was an ache that started in her stomach and ended in the back of her throat, choking her train of balanced thoughts. Once the seed of it had been planted it insinuated itself through her whole life and subsequently strangling all of her actions, wrapping itself around and killing all good thoughts like ivy. When she was a teenager she thought that she was repulsive. She avoided going swimming and shuddered at the thought of sarongs when she went to the beach. She liked running, or rather that asthmatic shuffling that she called jogging, but would only do it at night for fear that others would see her perceived imperfections. She couldn’t even contemplate sex with the lights on because it made her too anxious to enjoy any union, naturally that curtailed most liaisons she had.

Joe worshipped her entire body but especially her legs, those wonderful fleshy columns that held her up. He would spend hours languishing between her thighs mesmerised by their beauty. He would breath up and down them as though trying to steam up a mirror and have a mischievous grin every time she shivered with excitement. He tickled and tripped his fingers lovingly over the landscape of her legs.

Zoe reflected on how she had ended up in front of the mirror, naked and exposed. It had started with that foolish comment and Joe had whipped the covers off and frog marched her across the room to face her own reflection.

"Look at yourself," he demanded. "Look at your legs and tell me what you really see, not what your stupid family have told you."

Heart racing and her mouth dry, she tensed her stomach to be brave and steal a glance at her body. In the muted early evening light she could see that her thighs were indeed rounded, possibly they could do with being more toned. She frowned at her image.

Holding her so tightly that he left indentations in her shoulders he shook her until she startled out of her stupor. Emotionally shaken at the rough handling she blinked in response, her jaw lolling open like a badly hinged trap door.

"Tell me what you see," Joe growled.

Trying to think of something to say as her mind suddenly emptied of all coherent though. "Umm, err," she stammered. "They are white," burst from between her puckered lips, "and creamy."

Nodding in encouragement Joe gave her another menacing and possessive judder. "More," he commanded. She froze like a deer trapped in headlights, unable to respond. He had stormed out in disgust at her inability to express herself, it became obvious that she was devoid of anything else to say about her thighs.

So there she stood the burning sensations in her eyes indicated that hot, soft tears would roll from her eyes, eventually pooling and dripping from her chin. The shame of the internal conflict. She knew that Joe saw something that the wraiths did not and she hated disappointing him. From her perspective he was everything good that her family weren't, letting him down was one of the worst things that she could do.

She padded over to the bed and lay down on her back with her knees bent, pointing towards the ceiling. In this position all the fat seemed to slide down to her hips, leaving the expanse of her upper leg looking reasonably attractive.

"Come on girl, unless you get a grip of this it will drive him away," she muttered to herself.

Placing her palms on each thigh she lay there absorbing the sensation. Feeling the heat from her hands, she just closed her eyes and breathed. Gently, she started to move her hands over her skin, acknowledging the change in textures. She noticed that all of her leg was soft. There were fine little hairs that eased the flow of her moving hands. Subtle shifts in her hands felt unusually good. Zoe was able to start appreciating not just what Joe had said but the sentiment behind it. Disrespecting her body was similar to disrespecting him in some way that she was not too clear about but it made sense in her head.

Mumbling to herself she said, "They are white and creamy and soft to the touch. Like dough but not the horrible dough, dough like bread that you can knead, with a warmth that infuses your hands." Looking at the silver tiger stripes of her stretch marks she thought that they were ok. The strange mercury slivers cutting through the expanse of her skin, it gave the view texture and interest in a way that was novel to her.

The inside of her thighs were softer and more furrowed with stretch marks than the outside. The coarse patches of hair she had missed whilst shaving would normally fill her with guilt but they only added to the tactile sensation. Making soft, long sweeps of her thighs with her hands, exploring this new expanse of delight made Zoe lose track of time. She became so wrapped up with the pleasure of it she did not hear the bedroom door open and Joe enter the room.

Tip toe-ing towards the bed he bent down and kissed her lips startling her out of her reverie. "Good girl." A simple but potent statement laced with all the connotations of love, joy and possession.

Zoe looked shocked because the concept that maybe her thighs weren’t actually that bad was now  planted in her head. It had the potential, like a seed, that with the right nurturing would blossom into a love of her thighs

This week's writing challenge is Finland